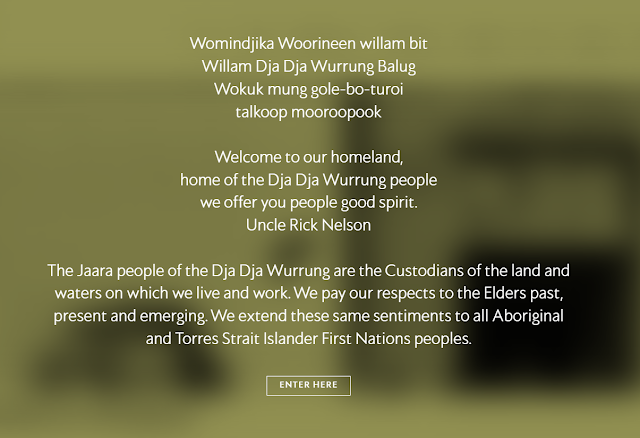 If you visit the website of the Castlemaine Art Museum this is what you are greeted with:

This kind of thing is becoming normal now in Australia. At meetings and sporting events we acknowledge Aboriginal elders and are welcomed to Aboriginal country. Some left-wing politicians prefer to fly the Aboriginal flag rather than the national one. About 40% of the continent is now held by small Aboriginal communities, with more to come. In NSW there is a plan to hand over management of all national parks to local Aboriginal groups. This has already led to one significant trail at Mt Warning being closed to the public. There is also a referendum to be held next year to provide an Aboriginal “Voice” to Parliament, with no clear indication of what powers this voice will have.

Back in 2015 the Canadian PM, Justin Trudeau, told a journalist that,

Canada could be the “first postnational state…There is no core identity, no mainstream in Canada.”

Australia is following a somewhat different course, one suggested by the feminist Germaine Greer in a book titled Whitefella Jump Up (2004), in which she claimed that an Australian national identity could be framed around Aboriginality.

How to explain all this? It is becoming increasingly clear to me that you have to understand politics as an inherited culture, with this culture being formed through accretions. The logic of each accretion plays out, each in its own way. It can be difficult to understand what is happening, because there are multiple sources that are not always entirely in harmony with each other.

One of these accretions is minoritarianism. There were campaigns to establish equal rights for religious minorities in the UK in the 1800s; these campaigns succeeded for Protestant dissenters in 1828, for Catholics in 1829, for Jews in 1858, and for atheists in 1888. Equal rights for minorities became an established part of the political landscape, but this does not explain why the identity of a majority should be stripped away and replaced by that of a minority. I think there are at least two additional points that need to be made here.

The first has been put forward by Eric Kaufmann. He has argued that the initial support for minority rights later became embedded as an emotional reflex:

Once liberalism turned from defending the rights of disenfranchised majorities to protecting minority rights, the narrative shifted. When it came to the rights of Catholics and Jews (in Protestant countries), racial minorities, or homosexuals, the “bad guys” were the majority, who menaced minorities in need of protec­tion. The emotive pairing of majority with malice and minority with empathy began this way. What started as a modest habit of mind has deepened into a reflexive demonization of majorities and lionization of minorities.

Kaufmann believes that this mentality crystalised in the US in the early 1900s. It led as early as 1916 to certain liberal progressives such as Randolph Bourne taking the now familiar attitude of lionising the culture of immigrant minorities whilst disparaging their own.

I do believe that Kaufmann is correct here and that there is an inherited emotional reflex at work that is deeply important for some people. It is noteworthy, for instance, that Germaine Greer felt so deeply about this majority/minority distinction, that she wished at one point in time to be Jewish and later on had herself adopted into an Aboriginal tribe.

However, I don’t think this could have happened without a second factor coming into play. Let’s say the aim is to extend minority rights. At some point in time, for there to be a workable politics, there needs to be an end point at which these rights have been satisfied. If there is no end point, then the minority will accrue more and more rights and eventually be in the far superior position. What is the logical limiting factor to ensure that this doesn’t happen? It is the majority following through with a normal concern for their own common good, i.e. wanting to uphold their own existence and to pursue the best within their own tradition.

Liberalism has made it difficult for the majority to do this, thereby removing any boundaries to minoritarianism. For instance, the anthropology of the first wave of liberalism is a negative one, in which humans are selfish and solitary and only come together in society via a social contract. For first wavers, social life is to be organised around the pursuit of profit in the market, harnessing low aspects of human nature such as greed. The former PM of the UK, Boris Johnson, gave voice to this “accretion” within modern politics when he said:

I don’t believe that economic equality is possible; indeed some measure of inequality is essential for the spirit of envy and keeping up with the Joneses that is, like greed, a valuable spur to economic activity.

Those who hold to this view will see politics in terms of Economic Man, with the “nation” being conceived as something like a vast economic enterprise in competition with other such enterprises. They will not give much weight to traditional ties of kinship.
The second wave liberals held that human nature was perfectible. It was corrupted by institutions of power (by inequality, therefore by “distinctions”). The solution was to commit to the larger “wholes” in which humans were by definition equal, such as the human race. As Lawrence Auster wrote:

On the left, socialists and Communists…believe in larger wholes, but the wholes they believe in are seen in terms of equality: the whole of society—equal; the whole of the human race—equal. They believe that man has the ability to engineer this larger, equal whole into existence, wiping out the unequal, inherited orders of class, sex, nation, race, religion, morality, and thus creating a New Humanity. Only the largest whole—humankind—is good, because only at the level of all humanity can there be true equality and fraternity uniting all people.

White leftists, therefore, are not primed to uphold the existence of their inherited national identity. They are more likely to focus on issues relating to structural inequality that such identities are thought to create. Leftists often condemn white identities as “supremacist” for this reason – so again, there is nothing here to limit an excessive emphasis on minority rights from this “accretion” within modern politics.
The solution to all this is not an easy one, as cultures form over time and become deeply rooted. If you do criticise one particular policy it does not change the larger culture, which will continue to form people in a certain way.
There are things that might be done. Clearly articulating the negative accretions would help, as would recovering the worthier understandings that preceded them. And, at some point, there needs to be a challenge to the process of formation. This is particularly true of schools which are more focused on propagating the political culture than people realise.